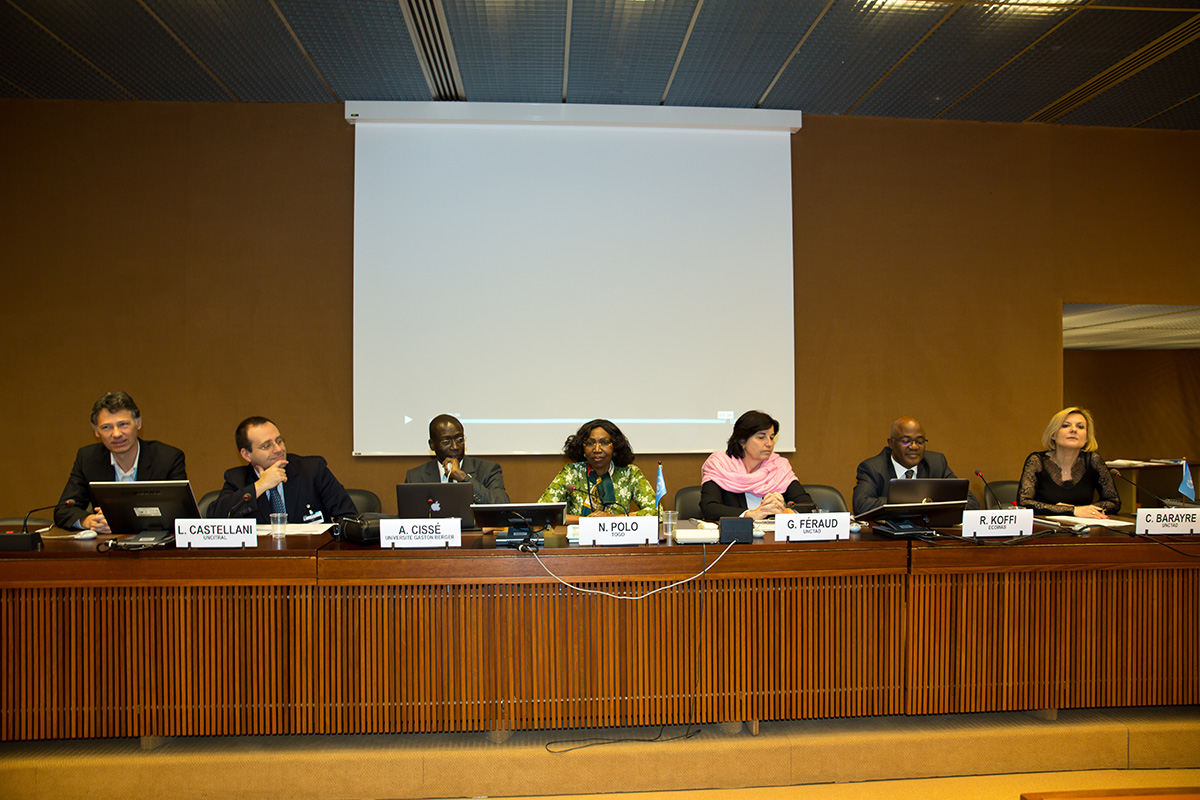 The meeting on Cyberlaw Harmonization in the Economic Community of West African States began today in Geneva.

The meeting was opened by Geneviève Féraud, Head of the Knowledge Development Branch, UNCTAD, and Her Excellency Ms. Nakpa Polo, Ambassador of the Permanent Mission of the Togolese Republic to the United Nations Office in Geneva. Ms. Féraud gave an overview of the TrainForTrade project, which was launched in West Africa in 2012 and will run until the end of 2015. The overall goal of the project is to accelerate progress in West-African  countries (Benin, Burkina Faso, the Gambia, Ghana, Guinea, Mali, Senegal and Togo) towards the achievement of internationally agreed development goals, particularly MDG 8, through trade-related training and capacity building. The project is implemented in cooperation with the ICT Analysis Section of the Division of Technology and Logistics, UNCTAD.

Raphaël Koffi, Head, Telecommunication/Information and Communications Technology (ICT) Division, ECOWAS Commission, welcomed the participants and reiterated the importance and usefulness of the project, which had permitted the participants to gain a better understanding of the legal needs and implications in the field of e-commerce. The course had made a difference in improving the business environment, facilitating investment, and helped decision makers to adopt laws that are more efficient, he said. He drew attention to the fact that there are still a set of challenges to be tackled, such as a better harmonization of consumer protection laws. He advocated for the inception of an emergence response team, especially with respect to the legal framework of electronic signatures.

Abdoullah Cissé, Professor at the University Gaston Berger of St. Louis, Senegal, gave a short overview of the merits of the first project phase, which had helped bridge gaps in legislation within the ECOWAS region. He highlighted the fact that cyber-security is something that concerns all, and that therefore no country should be left behind in establishing the necessary legal conditions. According to him, solidarity and sharing best practices amongst the countries of the region is paramount. Further training would be needed, so that countries currently lagging behind would be given an opportunity to catch up.

While the Convention of Malabo of 2010 is an important tool that should be adopted, he said, it is important to keep in mind that the first draft of this text was made in 2006. With the fast development in the field of new technologies such as electronic currencies, amongst others, new legal provisions would be needed in order to provide the indispensable security for everyone using these services. More capacity building activities on this subject will be needed in order to accompany the countries appropriately. While legal texts may be developed and may have been adopted, he continued, these can have no effect if the persons charged with their implementation are not sufficiently informed of their existence and implications.

Like Mr. Koffi, he saw a gap in the area of consumer protection, which is only covered by a very restricted legal framework in the ECOWAS region, according to him. A country does not only depend on the development of its economy, he said, but needs to keep up with the necessary legal conditions to enable a smooth running of its development.

Participants from Nigeria, Burkina Faso and Liberia concurred. A participant from Mali drew attention to the difficulties her country has faced in the past years in terms of its institutions. With 4 ministers in charge of the field of e-commerce and relative legislation since 2013, she said, it was not easy to advance on implementing legal texts.

Closing the morning session, Prof. Cissé highlighted once again the need for the development of legal texts and a more refined legal framework in the area of digital signatures and certifications. He asked not to leave the participating countries mid-way on their way forward.

The meeting will continue on 24 March and be followed by the Expert Meeting on Cyberlaws and Regulations for Enhancing E-commerce, Including Case Studies and Lessons Learned, 25-27 March 2015.